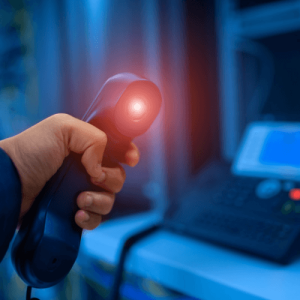 In recent years, there has been a growing trend of virtual phone systems. So much so that Multicom reports that more than 30% of businesses across the U.S. use VoIP to make and receive calls on a regular basis. But despite being cost-effective, Voice over Internet Protocol systems are vulnerable to various threats.

Hackers can eavesdrop or infiltrate a VoIP phone system to spy on calls and steal information from a business and its clients. They may also deploy a DoS attack, meaning an auto-dialing app floods a business phone system with calls that cause it to malfunction and become inaccessible. Finally, cybercriminals can employ an MITM attack to intercept a weak wireless network and access a VoIP system to make international and premium rate calls, which can rack up huge phone bills. These are just a few ways hackers use to worm their way into a network as discreetly as possible, but the following are several warning signs that hint at an exposed VoIP system.

Examining the call history of a VoIP system can reveal any unusual activity taking place. A list of unknown calls to a local or international destination is a common indicator of a compromised system. If your business doesn’t do business with overseas clients but there has been plenty of foreign calls, it should set alarm bells ringing as hackers may be using your company’s VoIP services for their own gain.

VoIP systems are cost-effective alternatives to traditional landlines, preferred by many businesses to make long-distance calls. While spikes in phone bills may indicate that business is going well, it might also mean that an attacker is exploiting the VoIP system for illegal activities. High bills could be the result of calls to international and premium rate numbers. Therefore, it’s best to scrutinize the phone bill and compare it with a recent call history report to confirm the presence of a hacker.

Once a VoIP system has been compromised, hackers may gain access to other network devices like computers and tablets. With this access, cybercriminals can trick unsuspecting victims with fake antivirus messages that inform users about viruses detected on a computer. These pop-ups are known as scareware that direct targets to a devious website to download and install fake security software. While it may seem harmless, the software is actually a malicious form of malware that creates a back door for hackers to steal personal information and an opportunity to deploy ransomware.

Nothing is more frustrating than searching for something on the internet and being redirected to an unsolicited website. That’s what happens when an exploited VoIP phone system infects other devices on the network. While it may seem like a glitch in the search engine, it could, in fact, be a hacker forcing a user to visit deceptive websites that collect login credentials and credit card details. What’s more, finding odd extensions in a web browser that generate push notifications and lure end users into installing malicious software is another sign of a compromised virtual phone system.

VoIP technology outshines traditional phone systems as it offers more functionality, like crystal clear audio and access to video calling for meetings. But a simple software flaw or an unencrypted connection can let hackers in, allowing them to secretly participate in all intra-company voice and video communication. Cybercriminals can remotely access virtual phone systems and record calls to obtain sensitive information. A tell-tale sign of an infiltrated VoIP system is webcams and microphones that operate automatically without authorization.

How To Best Handle a VoIP Hack

The best defense is a good offense when it comes to VoIP hacking, meaning it’s better to be proactive by continuously monitoring the system for potential threats, keeping devices up to date, and implementing secure protocols. However, if an end user suspects that a phone system is under attack, it’s advisable to disconnect the device from the network to prevent the hacker from infiltrating other devices and contact the service provider and let them know what’s happening with the VoIP system. Other actions, such as changing passwords, setting up firewalls, and installing reputable antivirus software, are also worth considering. This way, even if your VoIP system gets hacked, you’re able to cut your losses to a minimum.